Having worked with Le Navet Bete as an assistant on ‘The Wizard of Oz’ and ‘Robin Hood’, I was asked back to design the set and costume for their 2016 Christmas show, where I also enjoyed painting the set.

In this ‘live animal’ version of Rudyard Kipling’s story, when the animals all escape from the theatre the voicover artistes are left with no choice but to perform the story themselves, resulting in improvised costumes and hilarity. A challenging and fun show to work on, described as ‘ingenious’ by The Stage. 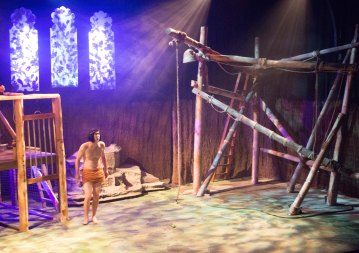